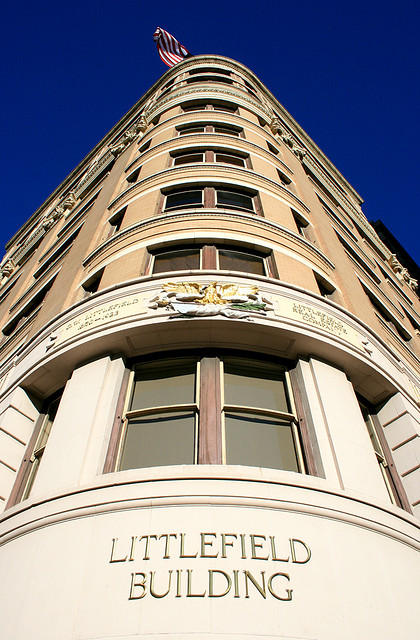 Pete Reid Law, PLLC has completed a move into new offices on the sixth floor of the legendary Littlefield Building, at the corner of Congress Avenue and Sixth Street in Austin, Texas.

The Littlefield Building became the financial center of Austin and was the height of opulence when it opened in January 1910. At the time, The Statesman reported that the building “embraces characteristics of the Corinthian order of Roman architecture”. It originally sported a roof garden for evening soirees until George Littlefield’s friendly competition with the eight-story Scarbrough Building across the street led Littlefield to enclose the roof garden, adding one more story to its original eight. For a short time, its nine stories gave the Littlefield Building the distinction of being the tallest skyscraper between New Orleans and San Francisco.

Prior to Pete Reid Law, the most famous tenant of the building was Lyndon Baines Johnson, who was appointed state director of the National Youth Administration (NYA) in 1935. This federal program, which put young people to work and into training programs and kept them in school, was the inspiration of Eleanor Roosevelt. She visited the Austin headquarters, also on the sixth floor of the Littlefield Building, “to find out why the Texas NYA director was doing such an effective job.” Twenty-six-year-old LBJ and his staff put in long days there, often working by the original gas lights—little tubes sticking out of the walls, with glass bowls around them—since the building superintendent switched off the generator that supplied electricity promptly at ten p.m. [Austin Postcard].

As of June 1, 2011, Pete Reid Law will continue this tradition of hard work and long hours on the fabled sixth floor, in an office suite which is also home to the highly successful and respected Law Office of John S. Rubin, PLLC.