In December of last year, the City of Austin released a report identifying eight City-owned properties that might be suitable for a professional soccer stadium. In discussing the site at 10414 McKalla Place, the report suggests that the property once had “significant environmental issues’. What the report doesn’t go into is the history of chemical explosions, the lawsuits, and the millions of dollars that have already been poured into McKalla Place.

In 1958, Reichhold acquired the McKalla property and operated a chemical manufacturing facility there from that time until 1985. It was mainly used to process, store and/or dispose of ‘solid waste’. Reichhold used and processed a lot of dangerous and extremely flammable chemicals at the site, including benzoyl peroxide (source).

In February 1985, there was a fire and an explosion at the site, and Reichhold decided to close operations at McKalla. There was a Closure Plan to remove and clear the site of hazardous materials in accordance with State regulations, but in 1994, the State noted that the site could still be contaminated, (source).

For years, Reichhold actively marketed the Property for sale and in May 1995, the City of Austin purchased the site for a little over $1.4 million, (source).

The City planned to make the site its North Service Center for Water Utilities, but in November 2003, construction was halted due to another massive explosion at the site, during excavation for a storm sewer line, (source).

The explosion reportedly injured four workers, one critically, and was described as being like a ‘sonic boom’, rattling the ground and buildings up to 50 yards away, (source).

The City later found approximately 500 pounds of benzoyl peroxide still buried on the property, (source). Work was immediately halted at the site, and the task of cleaning up, and figuring out who would pay for the clean-up began.

It took several years and millions of dollars to eventually clean up the site. In 2007, the City reported that it had already expended more than $4 million to remediate the site and the project was still not completed, (source).

The City of Austin also sued Reichhold for damages in Federal Court. It was not a short or an inexpensive litigation. As the lawsuit dragged on, the City was forced to increase its budget for legal costs associated with the lawsuit from $150,000 to $270,000 to $725,000 and eventually to more than $1 million, (source).

Eventually, after more than two years of litigation, the lawsuit was settled with Reichhold reportedly agreeing to pay the City $3.6 million in damages, (source).

That figure is obviously less than cost of the clean-up and doesn’t include the lawsuits brought by the individuals who were injured in the blast. It also wouldn’t cover the millions of dollars in other consequential losses suffered by the City, including delay costs, contract cancellation costs, and construction costs incurred prior to the explosion.

Since the plans for the Water Facility were shelved, McKalla Place has remained vacant. However, over the years it has occasionally been raised by the City of Austin as a possible location for other projects.

In 2010, the Statesman reported that is was being considerd as a site for a homeless RV Park. That proposal was opposed by neighboring residents and businesses. Here are some comments from interested parties at the time, comments that would suggest that a soccer stadium would not be unwelcome:

“If the city allows an RV park here, it will stymie the denser development that is occurring,” said Roger Duck, who owns a self-storage business next to the proposed RV site. “I know Alan and support what he’s trying to do. This just isn’t the place for it.”

Because of its proximity to the Domain and a Capital Metro commuter rail stop, the McKalla Place land is valuable and could be a catalyst for redevelopment, said Brian Gaston, who owns six acres next to it. The city bought the land with taxpayer money and should use it for its highest and best purpose, said Vicki Howard, who leads a neighborhood group in the area, (source).

More recently in 2014, McKalla Place was identified as an underutilized City-owned property suitable for development of a “model affordable, family-friendly, energy efficient multifamily housing project”. At the time it was estimated that the value of the property was $5.5 million to $7 million, but no further action was taken, and the site remains derelict (source).

I live just south of the river close to downtown, so selfishly speaking, the idea of a soccer stadium in North Austin isn’t so appealing. I would still prefer Guerrero Park, but notable beer drinker and soccer fan Lee Nichols wrote an excellent article extolling the virtues of McKalla Place. So I went to visit the site a few days ago. 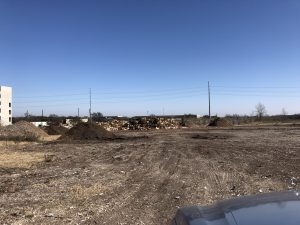 First of all, it’s not really on McKalla Place. That street dead ends into a printing shop and has no access to the site. Fortunately though, the site is currently accessible through a narrow path near the corner of Braker and Burnet.

As the pictures and video below shows, it’s just wasteland. It’s been a long time since I’ve even seen such an empty expanse of unused land in Austin. I was almost getting flashbacks to Glasgow in the 1980s. It’s literally a dump. And although the area is changing, it’s currently surrounded by industrial use buildings and warehouses. Few people would protest against this eyesore being removed.

In 2007 the City of Austin had a vision for this North Austin neighborhood as being the “Second Downtown”. With the continuous development of the Domain nearby, that vision is closer to reality. It’s not the ideal downtown site for a MLS team, but it’s arguably an ideal new downtown site for Austin.

Regardless, the property at McKalla Place has been a problematic and expensive millstone for the City of Austin. It has lost millions of dollars on the purchase, and the longer it lies vacant, the more money the City continues to lose.

It’s not the perfect location for a MLS stadium by any means, but as the next article will address, it does appear to be the path of least resistance.

Also on Austin Sports Law: MLS to ATX #7: The Untold Story of 10414 McKalla Place – and what it looks like today… https://t.co/FgPRcp1yDr pic.twitter.com/PasuMiGe07